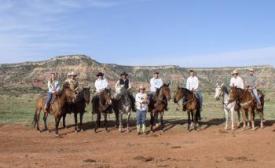 The 3T Cattle Co. was established in 1900 by Richard Abercrombie. His three sons added homesteads to the ranch in Quay County. In 1960, son Robert and his son Howard, bought a pen at the Tucumcari Bull Test when it started. Abercrombie Ranch has been using performance tested bulls on their cow herd ever since.

Howard's son Robert, and wife Billie, bought 40 registered Horned Herefords from the T4 Cattle Co. in 1985. Artificial insemination has kept them abreast of the leaders in the Hereford industry. Robert and Billie's two sons, Richard and Jake, were heavily involved in 4-H and FFA showing and judging Herefords. The boys have a good eye for cattle and supply a lot of brawn on the ranch and farm.

Temperament, eye pigment, feed efficiency, and udder size, rank high in our bull selection. The bulls currently on feed at Tucumcari are some of the best we've raised-- they will add width and length to any cow herd.